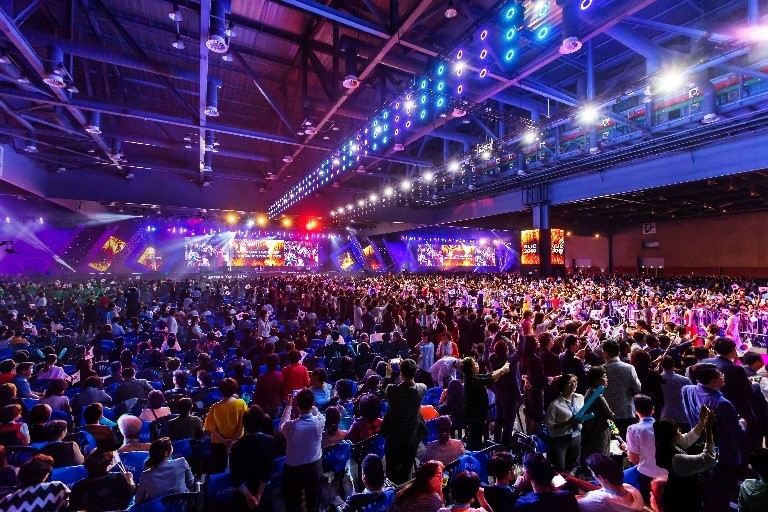 – Over 15,000 attendees from over 50 countries around the world share in the vision ‘Change Your Life, Change the World’
– Unveiling of innovative new products LC Base and Unimate Fuel
– Jeju Island announced as the venue for the 2020 Global Summit

(June 14 & 15, 2019). Unicity International successfully held the two-day ‘2019 Global Leadership & Innovation Conference’ (GLIC) from June 14-15 at KINTEX in Ilsan under the theme of ‘Change Your Life, Change the World.

The 2019 Global Leadership & Innovation Conference was attended by over 15,000 distributors from over 50 countries around the world who have played a leading role in Unicity’s growth over the last two years, as well as top executives from Unicity International including Interim Chief Executive Officer(CEO) and Chief Financial Officer(CFO) Curt Hedges, President Christopher Kim, Chief Operating Officer(COO) Dan Hughes and Asia Pacific Executive Vice President Bobby Kim. Members of the Unicity Scientific Advisory Board (USAB) also took part in the event, including director Dr. Benjamin Bikman and members Dr. Stuart M. Phillips and Dr. Ted Naiman. These experts spoke about the key scientific and medical insights behind the new products.

Unicity International’s Asia Pacific Executive Vice President Bobby Kim stated “When put together, the changes brought about by each of you as inpiduals have the power to change the world and achieve Unicity’s mission of Making Life Better.” He went on to say “In line with this event’s theme of ‘Change Your Life, Change the World,’ I hope that even more people will be able to make positive changes in their health and in their lives.”

Unicity International President Christopher Kim stated “I’d like to welcome everyone who has travelled a long way to be here today in Seoul, Korea, which is a global role model for Unicity and a driver of the company’s growth. I hope that the ‘change’ Unicity is advocating through this event will serve to broaden the horizons of everyone here today and lead you down the path to success.”

Under the theme ‘Change Your Life with Products,’ the first day of the two-day conference featured presentations on Unicity’s innovation and cutting-edge science, as well the unveiling of new products developed through these technologies.

President Christopher Kim introduced Unicity International’s executive team on stage, while COO Dan Hughes spoke about the current state of Unicity’s business. “Unicity plans to open three new offices this year,” he said. “Near to the company headquarters in Utah, we are currently building a new manufacturing facility that will be directly managed by the head office. This new facility will enable Unicity to expand our production capacity, and increase the speed at which we develop and bring to market new products.”

The next speaker was Dr. Benjamin Bikman, director of the Unicity Scientific Advisory Board (USAB) and assistant professor of physiology and developmental biology at Brigham Young University. Bikman’s presentation covered insulin management and the relationship between insulin and metabolism, as well as the importance of burning fat. This was followed by a presentation by Dr. Stuart M. Phillips, professor of kinesiology at McMaster University in Canada, fellow of the American College of Sports Medicine, the American College of Nutrition and the Canadian Academy of Health Sciences, who gave a lecture on the connection between protein intake and muscle function. The final speaker was Dr. Ted Naiman, a board-certified family medicine physician, who gave a presentation about optimized ratios of energy and protein.

The evening of the 14th was ‘Entertainment Night’, which featured a talent show in which members from Korea, Thailand, Japan, Myanmar and the Philippines took to the stage. A total of six teams, including two from Korea and one from each other country, showed off the skills they had perfected through months of practice in front of the cheering audience. This was followed by a special mini concert by PSY, which caused the atmosphere in the room to reach fever pitch.

On the 15th, the second day of the conference kicked off with a video showcasing Unicity’s CSR activities around the world under the theme ‘Change the World with Leadership.’ The first speaker was Thierry Coppens, the General Director of MSF Korea, the Korean chapter of Doctors Without Borders (Medicins Sans Frontieres/MSF). He thanked Unicity for the company’s ‘Share the Love’ campaign, which was held as part of a global CSR effort by Unicity International over the past month. Unicity International Interim CEO and CFO Curt Hedges then took to the stage for a ceremony in which he presented Coppens with a donation of 150 million KRW from Unicity to MSF Korea. In particular, Mr. Hedges turned heads by announcing on stage that he would be adding a further 50 million KRW from his own pocket to the sum donated.

‘Share the Love’ was a global CSR campaign run by Unicity in which members of the public could write messages of encouragement and support for Syrian refugees that MSF is assisting in Bekaa Valley, Lebanon. For every comment uploaded to the campaign microsite (www.makelifebetter.com), Unicity International donated 10 USD to support MSF’s medical work in Bekaa Valley. Unicity International added an extra sum on top of the funds raised through the campaign, donating a total of 150 million KRW to MSF Korea.

The next event on stage was the ‘Celebrate U’ ceremony, in which distributors were recognized for their achievements over the past year. Park Jin-hee, who has achieved the honorary position of Unicity International’s Global Ambassador, and Kang Gwon-soon, who achieved the rank of Double Diamond, were invited on stage to share the thrill of being promoted with everyone present. After the official ceremony, it was announced that the next event will be a Global Summit held in Jeju Island.

The new products unveiled at the global convention were also on display at booths around the exhibition hall, allowing participants to learn more about them. With separate booths for the new products LC Base and Unimate Fuel, a History Zone for learning about Unicity’s history, and a CSR zone detailing the CSR activities of Unicity branches around the world, attendees were able to peruse a variety of information about both Unicity and the company’s products. The UniCafe booth sold Unimate and four types of Unicity drinks, with all proceeds from sales donated to the DongMyung Child Welfare Center where Unicity Korea staff regularly engage in volunteer work.

LC Base is a meal replacement that contains a variety of vitamins and minerals, including whey protein and coconut cream. Packaged in single serving sachets for convenience, LC Base makes it easy for consumers to enjoy the good fats found in coconut oil and milk. As a meal replacement designed to assist in weight loss, it has a smooth flavor and can be consumed alongside other Unicity products including Bios Life C Plus, Bios Life S and Bios 7. Adults seeking to improve their health through weight loss or dietary adjustments should take one sachet per day with 360ml of water.

Unimate Fuel is a blend of yerba mate and coconut cream that also allows consumers to enjoy the mild aroma of mate and coconut. Unimate Fuel Salted Caramel has a light caramel taste with universal appeal, and is most effective when combined with a healthy diet and regular exercise. All it takes is mixing a single sachet with 250-300ml of cold or warm water once per day.

Before and after the event and during intermissions, the booths were swarmed by participants who enjoyed browsing Unicity’s products and taking pictures in the Photo Zones. The new products were also available for purchase at the event, allowing attendees to get a sneak peek and try them out before the official release in their countries.

Unicity
Unicity is a global wellness company based out of Utah with more than 100 years of history and tradition under the mission to ‘Make Life Better’. As a direct sales company, Unicity supplies up to 400 products across 50 countries, including the dietary fiber-based Bios Life range and nutritional supplements containing essential vitamins and minerals as well as personal care and household items. Unicity provides a community for those who seek to make their lives better.